The electrophoresis mobility shift assay (EMSA) is a rapid and sensitive method to detect protein–nucleic acid interactions1-6. It is based on the observation that the electrophoretic mobility of a protein–nucleic acid complex is typically less than that of the free nucleic acid. The current, widely-used assay differs little from that originally described by Fried and Crothers7 and Garner and Revzin8; although precursors to the technique can be found in the earlier literature 9-11. 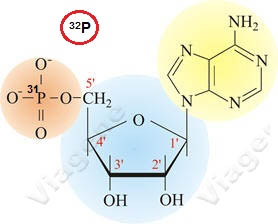 Classic EMSA uses radiolabeled probes (usually, p32 was used) to detect the interaction of DNA/RNA and proteins via autoradiography. Radiolabeled probes, when compared to non-radioactive probes, exhibit many disadvantages, one of which is that radioactive probes must be re-synthesized biweekly to guard against short isotope half-life as well as radiolysis. Non-radioactive probes, on the other hand, are stable for years. Even though, a great advantage of using radiolabeled probes in EMSA is that the labeling has almost no effect on features of DNA/RNA and produces reliable results because the difference between P31 and radioisotope P32 is only 1 electron (Pic. 1).

With the development of enhanced chemiluminescence and high sensitivity fluorescence-dyes, non-radioactive probes are more often used in EMSA. However, different EMSA results may be observed between P32-labeled and non-radiolabeled probes: sometimes, the complexes of DNA/Protein or RNA/Protein could be detected clearly with radioactive probes but missed in non-radioactive EMSA, or, the different patterns are observed between P32-labeled and non-radiolabeled probes.

(1) Compared to radioisotope P32 to P31, labeling oligos with biotin (Pic. 2), fluorescent dye (Pic. 3) or digoxin would increase the size of probes significantly, which may affect the movement of protein–nucleic acid complexes.

(2) The molecules of biotin, fluorescent dyes or digoxin are not the components of nucleic acid. Labeling oligos with these molecules may change the structure or net charge of probes. Sometimes, more than one set of probes for a same DNA/RNA-binding protein may need for a successful EMSA.

(3) Aggregation in the gel wells can be seen if non-radioactive EMSA is performed at the same interaction condition of protein–nucleic acid complexes as that of EMSA using P32 probes.

(4) Many probe sequences for transcriptional factors in literature are from EMSAs using P32-labeled probes, and have only 18-22bp (mw~12K). Non-radiolabeling of DNA/RNA with biotin, fluorescent dye or digoxin could add additional 2K Delton to a probe, which may cause steric hindrance for the interaction of proteins and nucleic acids

(5) To increase the sensitivity of non-radioactive EMSA, DNA probes are often labeled with non-radioactive molecules at two terminals, which makes steric hindrance even worse.